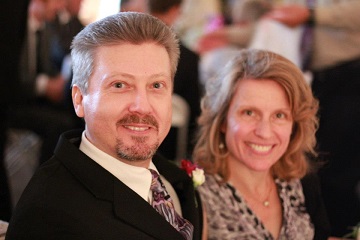 The sixth of seven children, Richard Ritenbaugh was born in February 1966 to John and Evelyn Ritenbaugh in Pittsburgh, Pennsylvania. When he was two, his family moved to Southern California, where they lived until 1975. In that year, a ministerial transfer sent the family to Columbia, South Carolina, where Richard developed his present interests in woodworking, growing peaches, NASCAR, and writing, as well as an affinity for the American South.

In early 1983, another transfer settled the family in Highland, Indiana, where in 1984 Richard attended Spokesman's Club, was baptized, and graduated from high school. From Highland, he left for Ambassador College in Pasadena, California. During his sophomore and junior years in college, he worked in Ministerial Services/Church Administration for the Worldwide Church of God (WCG), and in his senior year, he held the position of News Director at the campus radio station, KBAC.

After receiving his bachelor's degree in theology in 1988, he took a job with TransAmerica Insurance in Costa Mesa, California, working as a premium auditor for its Worker's Compensation division, a job he held until 1992. After Thanksgiving of 1988, he met and dated Beth Bulharowski, and they married in July of the following year. Soon thereafter, TransAmerica transferred the newlyweds to San Diego County, California, where they lived in the Oceanside area, attending church services in Escondido. Their first child, Courtney, arrived in December 1990.

In the meantime, events in the WCG were accelerating toward the point that its administrators eventually repudiated most of the doctrines restored to the church through Herbert W. Armstrong. Having kept abreast of the massive changes—and having rejected them—Richard and Beth decided to leave the WCG in early January 1992, along with his parents and several others scattered across the nation.

In that same month, the Church of the Great God was formed in Charlotte, North Carolina, and the Ritenbaughs were among its first members. Richard was appointed to its Board of Directors, and in May, the church hired him as a writer and the managing editor of its magazine, booklets, and other publications, as well as to maintain its computer systems. Of necessity, the family moved to Charlotte, where they have remained.

In January 1993, Beth gave birth to the couple's second child, John; in December 1998, their third child, Jarod; and in February 2001, their fourth, Aric. Richard was ordained an elder in October 1995, and later as a pastor in December 2007.  He and Beth now also have two granddaughters. He has since continued to serve the church through his writing, editing, and speaking.

Email him directly at rritenbaugh@cgg.org.