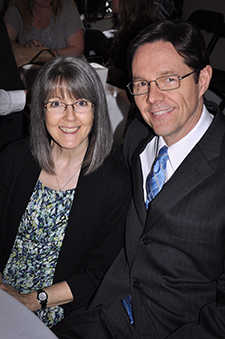 Martin became a member of the Church of the Great God and a charter member of its Board of Directors in January 1992. He was hired full-time by the church as the business manager in 1996, and now serves as a minister, as well as the church's business manager and Treasurer.

Martin was ordained an Elder on Pentecost, 1999, and performs full ministerial duties including writing and speaking. He is also the associate editor of the church's Forerunner magazine. As church Treasurer, he serves as its financial officer, responsible for maintaining business integrity in both financial and legal matters, oversight of federal and state tax liabilities, investment of funds, the preparation and reporting of financial reports to the Board, and administering the church's bank accounts and corporate insurance policies. In addition, he coordinates building and grounds construction and maintenance.

Before his employment with the church, Martin worked in a number of positions in corporate and private businesses. His experience includes corporate facilities project management, purchasing and business management, computer systems support, and regional marketing, sales, and distribution.

Martin was born in Thorpe Waterville, England, on July 5, 1954, to Raymond and Cynthia Collins. He has a younger sister and brother. Most of his childhood was spent in the U.S. state of Maryland. His education includes engineering and business-related courses at Johns Hopkins University and Towson State University, respectively. In 1988, Martin received a Bachelor of Arts degree in Theology from Ambassador College in Pasadena, California.

His family began attending the Radio Church of God (later named the Worldwide Church of God, WCG) in July 1963, where he remained until January 1992. He was baptized in April 1974. During their time with the WCG, Martin and his wife Susan were very active with the church's youth and various support functions for the church.

Martin and Susan (Ritenbaugh) were married on December 28, 1975, in Chevy Chase, Maryland, and have three children and three grandsons. They now live in South Carolina. Their travels have taken them to Canada, Mexico, the U.K., Europe, Africa, the Caribbean, and most of the United States.

You can email him directly at mcollins@cgg.org.