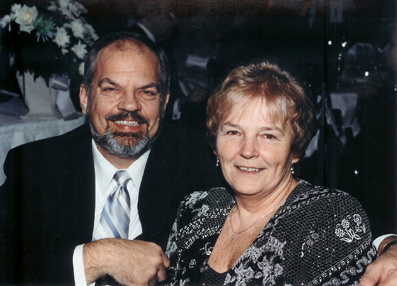 Mark was born in a southwestern suburb of Chicago on September 9, 1950. The oldest son and second child of Larry and Dorothy Schindler, he was raised in a joyful, loving home in Chicago with two brothers and four sisters. His older sister died when she was only 15 months old, just three weeks after Mark's birth. But their father and mother, people of faith who appreciated all that God had given them, continued on. When his father died suddenly in 1996, Mark's parents had been married for over 48 years.

After graduating from high school, Mark attended Northern Illinois University. While in high school, he met Nancy Treacy, and they immediately became almost inseparable. They married during his college years on April 24, 1970.

Their first child, Christopher, was born in 1972, followed by Matthew (1975), Treacy (1978), and Mark (1979). Their family has now expanded to include two daughters-in-law, a son-in-law, and three grandchildren. Through most of their married life, Mark has worked in the hospitality industry in various positions within the engineering departments of hotels. He is currently retired, last working as Director of Engineering at a Chicago hotel.

Mark and Nancy were raised as Catholics, and after Matthew was born, they decided to become better Catholics. So they started studying and realized the Catholic Church was teaching many things that did not agree with the Word of God. As they left the Catholic Church and examined at a host of other religions, they saw that each had pieces of the truth, but at the same time, they were teaching many things contrary to God's Word.

Finally, in the early 1980s, they came in contact with the Worldwide Church of God (WCG) and found the place where God's truth was being taught. Both Mark and Nancy were baptized on March 5, 1983. Since then, they have served the Chicago congregations in many different capacities.

As apostasy crept into WCG in the late 80s, doctrines were being watered down and started reflecting the erroneous teachings that Mark and Nancy had rejected in all those other churches. In 1992, they withdrew from the WCG and became members of the Church of the Great God. Mark, who was ordained an elder on the Last Great Day, October 7, 2004, has given sermonettes and split-sermons, written articles for Forerunner, and served as host of CGG's Chicago congregation for more than a decade.

He can be contacted at mschindler@cgg.org.