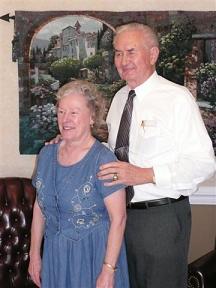 Born January 19, 1930, in San Francisco, California, John Reid lived there for just six years before he moved across the bay to be raised in Oakland. At 19, he attended California Polytechnic College in San Luis Obispo, California.

In 1951 at age 21, he enlisted in the Army, where he went through infantry and airborne training, receiving his parachuting badge. He was soon sent to serve his country in Korea. He spent nine months at the front line in a heavy weapons company. During the conflict, he was wounded, spent one month in the hospital, and was then returned to the line.

Upon discharge from the service, he found employment with a large department store. At the end of a year, however, he landed a job with Durkee Famous Foods, a food service company, staying with them and Van den Berg Foods (which bought Durkee out) until his retirement in 1992. During his 37 years of service, he worked as a national accounts manager, traveling coast to coast and selling all-vegetable shortening and oils to the restaurant industry.

He met his wife, Dolores, in Tacoma, Washington, and they were married in July 1954. They have two sons, Brian and Garrett, and a daughter, Andrea, as well as six grandchildren.

The Reids were baptized together into God's church in November 1966, attending various congregations over the years in Orange County, California. In 1970, John was ordained as a deacon, and in 1974, Dolores became a deaconess. John was later ordained to elder on Pentecost, May 22, 1977.

Aware of the apostasy creeping into the church, John, Dolores, their son, Brian, and his family were among the founding members of the Church of the Great God, attending its first service on January 11, 1992. Upon retiring in 1992, he served the brethren in Southern California as an elder and also coordinated Church of the Great God Feast sites for twenty years. Later, he and Dolores moved to the Springfield, Missouri, area, where he served the local congregation and traveled on occasion to visit brethren in surrounding areas. Along with his speaking and writing, John also held the office of Vice President on the church's Board of Directors for 25 years.

John died on October 1, 2017, after an extended period of weakness and decline. Those in Church of the Great God will always remember his sense of humor and pleasant, helpful personality, his wisdom and his eagerness for the return of his Savior, Jesus Christ.