In several places in Scripture, newly converted Christians are compared to newborn babies--sometimes positively, as desirig the pure milk of God's Word, and sometimes negatively, as consumed by fleshly desires. They are also shown as babes who are expected to grow into complete, mature Christians. This imagery springs from Jesus' born-again teaching in John 3. (iStockphoto) 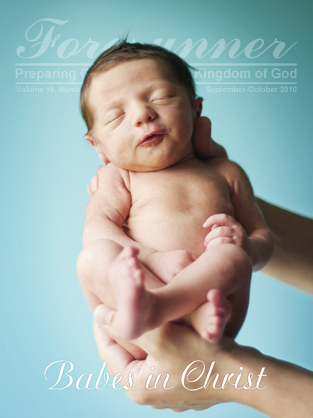 The images that Jesus used to explain the spiritual birth of a Christian have confused many down through the centuries. John Ritenbaugh explains His use of "wind" and "Spirit," as well as the concepts of "Jerusalem above" and "firstborn" in relation to the born-again doctrine. The Bible consistently compares Christians to already-born and maturing children or adults.

Too many Americans confine their giving of thanks to the one day on which their national holiday occurs—and many of them spend their Thanksgiving merely eating too much and watching football. Four vital questions about thanksgiving help us to evaluate our approach to this spiritual duty.

We must always remember one important fact: If God says a thing will happen, it will happen! God's Kingdom will come, whether or not we as individuals inherit it when the time comes. Despite so-called evidences to the contrary generated by the Deceiver, this age will end to be succeeded by the glorious reign of Jesus Christ.

WorldWatch
NATO:
In Search of a Mission
by David C. Grabbe

The North Atlantic Treaty Organization (NATO) was a bastion of Western democracy during the Cold War, but since then, it has lacked a clear purpose. David Grabbe argues that, having failed to keep the Russians out and the Germans down, NATO is struggling to remain relevant in a changing world.

Matthew 9:27-31 contains the story of two blind men whom Jesus healed. These men are certain that Jesus can heal them, showing their faith, but they do not have enough faith to obey His command not to tell anyone about it. Martin Collins analyzes the healing of these two men, who did not let their handicap keep them from seeking Christ.