These oxen, yoked to pull a cart or a plow, must work together, and it is the yoke that allows them to do this in the most efficient manner. The Bible uses the metaphor of a yoke to illustrate several ideas, but the most significant concerns taking Christ's own yoke upon ourselves. Instead of implying a burden, taking His yoke suggests ease and rest. (Alamy) 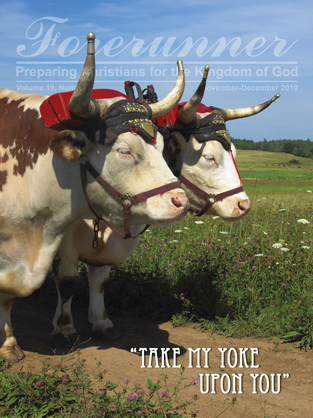 This world presents us with a disordered array of religions of all kinds—from atheism to animism, ancestor worship, polytheism, Buddhism, Hinduism, Islam, Judaism, Christianity, and many more besides. Where can we find the true religion, the true church, in all this confusion? John Ritenbaugh reveals that only one religion with its one true church has the answers to salvation and eternal life—the church Christ founded and heads today.

Ready Answer
Take My Yoke Upon You
by Ronny H. Graham

The Bible makes frequent use of the yoke as a symbol of work, servitude, and union, but we moderns are unfamiliar with yokes due to our non-agrarian lifestyles. Ronny Graham describes the various kinds of yokes—including human yokes—and shows how they are relevant to our Christian lives.

Prophecy Watch
The Agrippas:
The End of Ancient Judea
by Staff

Two Herod Agrippas, father and son, ruled parts of Palestine during the period of the early church, touching the ministries of James, Peter, and Paul. While they won over many first-century Jews, they had far less success with Christians, whom they persecuted from time to time to curry favor. Their history fills gaps in the Bible's depiction of this critical period.

WorldWatch
The Geopolitics of Israel
by Richard T. Ritenbaugh

The land of Israel has a unique geography that limits its responses to international events, and the same factors that constrain it today also did so in biblical times. Richard Ritenbaugh describes how its position at the crossroads of three continents makes the Holy Land strategically valuable to the great powers around it.

Jesus Christ's miracle of feeding the five thousand people who had assembled to hear His message is the only miracle that all four gospels record. Martin Collins explains how Jesus used the circumstances to teach His disciples lessons that they would be able to use in their ministries after His death.