Early in Scripture, God promised to supply a Savior and Redeemer, the Seed that would bruise the head of the serpent. After the Flood, God began to provide signs—messianic revelations—to inform and encourage His people about the One to come. By the time of the closing of the Old Testament, He had given enough clues for a faithful person to know who fulfilled the prophecies, but His own people rejected Him. (Alamy Images) 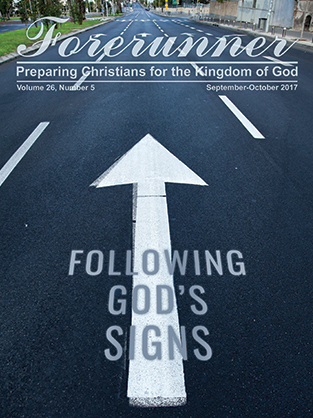 After Noah and his family left the ark, God set the rainbow in the sky as a sign of His covenant with all living creatures not to flood the world again. Ever since, John Ritenbaugh explains, God has been providing additional signs, particularly those that promise that He will provide a Savior and Redeemer to free mankind from its bondage to sin and death.

While the church of God has long taught that the azazel goat of Leviticus 16 represents Satan bearing part of the blame for man's sins, the present series has shown that this view has no biblical support. David Grabbe concludes the series with several common questions posed by those who have desired additional clarification of some of the issues involved in the subject.

When reading the book of Revelation, we often pass quickly through chapters 4 and 5, perhaps because very little of significance seems to happen in them. To many, they contain just a fantastic description of God's throne room. David Grabbe, however, explains that chapter 5, especially, narrates an event of tremendous magnitude for those whom God has chosen.

For many years, the church of God has preached that church members should keep their eyes on the Middle East. As tensions heat up there, a figure who deserves attention is the current crown prince of Saudi Arabia, Mohammad bin Salman Al-Saud, who, while only 32 years old and not yet king, has already begun to move his kingdom toward more stable and moderate political, cultural, and religious positions.

Bible Study
The Miracles of Jesus Christ:
A Second Large Catch of Fish (Part One)
by Martin G. Collins

Jesus Christ performed two miracles during His ministry in which His disciples pulled in large catches of fish. The second occurrence took place after Christ's resurrection and before His ascension. Martin Collins posits that a comparison of the two miracles reveals the progress of Jesus' efforts to prepare His disciples for the next steps of their journey toward sanctification.