In Revelation 3:8, Jesus Christ promises the church in Philadelphia “an open door, and no one can shut it.” Most people do not realize that He is referring to a prophecy found in Isaiah 22 that relies heavily on understanding the office of a steward, treasurer, or prefect of a royal house. In this way, Philadelphia’s open door may signify something far different than the church’s ability to preach the gospel.  (iStockphoto) 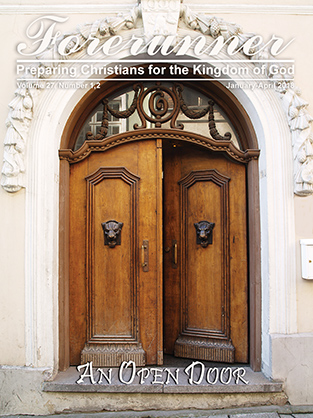 Among Catholics and Protestants exists the erroneous belief that the New Covenant abolishes the law rather than the truth that the epistle to the Hebrews provides: that Jesus Christ perfectly fulfilled His spiritual responsibilities and can now aid us in fulfilling ours, which includes keeping God's commandments. John Ritenbaugh continues to explain the background to the book of Hebrews, showing why the early church needed its singular message.

Ready Answer
The God of the Old Testament
by Pat Higgins

In the professing-Christian world, an insidious, false belief exists: that the God of the Old Testament was a cruel, angry God, while Jesus, the God of the New Testament, is kind and loving. Pat Higgins, using the Bible's own testimony, shows that nothing could be farther from the truth! In fact, Scripture plainly shows that the same God has always communicated and interacted with humanity throughout its history.

The modern church of God, particularly a few of its splinter organizations, have made a big deal out of Revelation's letters to the seven churches. Often highlighted is the "open door" promised in the letter to Philadelphia. David Grabbe provides proof from Isaiah 22 that our understanding of this image should be revised to reflect the insight given in this neglected Old Testament prophecy.

WorldWatch
The Politicization of Motherhood (Part Two)
by Mike Ford

The feminist movement has taken a heavy toll on the importance of motherhood to our society. For instance, feminists encourage mother to return to work as soon after childbirth as possible, leaving the baby in the care of a daycare center. Mike Ford focuses on the politically charged rhetoric of leading feminists that demonizes traditional marriage and motherhood, painting stay-at-home moms as domestic slaves.

Bible Study
Are You Justified?
by Martin G. Collins

"Justification" is a theological term that many people do not understand, thinking that it is a complex point of biblical doctrine. However, it is not as difficult as it may seem on the surface. Martin Collins explains what justification is and how it works in the life of the individual whom God calls to salvation.