Hollywood almost never comes up with anything new; it just keeps on remaking popular stories from yesteryear. Even so, a recent development in Tinseltown is the mainstreaming of horror movies—to the point that a few of them are being considered for Academy Awards. If nothing else, the rise of the horror genre suggests that a spirit of fear is dominating our entertainment, a spirit that finds its source in “the prince of the power of the air” (Ephesians 2:2).  (iStockphoto) 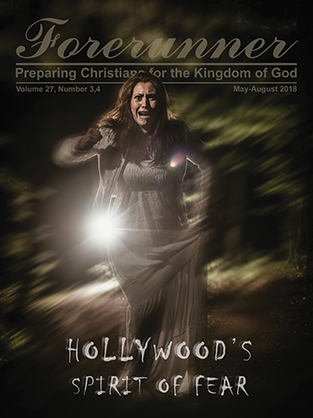 The book of Hebrews was written to fulfill several needs of the first-century church. One of the most critical needs was to explain God's opening of eternal life to the Gentiles, as He did through Peter's visit to the house of Cornelius in Acts 10. John Ritenbaugh explains that Jewish converts, especially, faced pressure and even persecution from their own people - even from their own families - for their belief in Christ.

Ready Answer
Unity and Division:
The Blessing and the Curse (Part One)
by Charles Whitaker

Those who read the Bible regularly come to realize that it speaks a great deal about the opposing subjects of unity and division. Unity seems to be "godly," while division is "ungodly." However, Charles Whitaker cautions that, while they are irreconciliable conditions, unity and division are not as black and white as we typically think of them.

Many nominal Christians believe in an ever-burning hell where the wicked are tormented forever. Though they might point to Revelation's Lake of Fire or to Jesus' mention of Gehenna fire as support for such an idea, the Bible does not teach the pervasive doctrine of hell as a place of eternal torment. Richard Ritenbaugh contends that, instead, God will eradicate all sin and wickedness, not punish for it forever.

WorldWatch
Hollywood Horror:
Promoting the Spirit of Fear
by Joseph B. Baity

The horror movie genre is no longer the home of B-movies and cheap scares but a burgeoning and critically acclaimed sector of Hollywood's film industry. The past two years have seen it attract A-list talent and even awards attention. Joseph Baity connects horror's upswing at the box office with the general culture's state of fear.

Bible Study
The Fruit of Justification
by Martin G. Collins

The heavily theological subject of justification confuses a great many people. In fact, much of nominal Christianity, even theologians, do not understand the Bible's teaching on it. Martin Collins, focusing on what justification produces, provides clarity on a few points of this challenging doctrine.