The recipients of the epistle of Hebrews were allowing themselves to drift away from what the apostles had taught them. The distractions of coping with the chaos at the end of an age wreaked havoc on their ability to discern what was truly valuable, and their zeal for God was faltering. Because we, too, live on the cusp of the crisis at the close of the age, we must ask ourselves, “Am I seeking treasures on earth or laying up treasures in heaven?”  (iStockphoto) 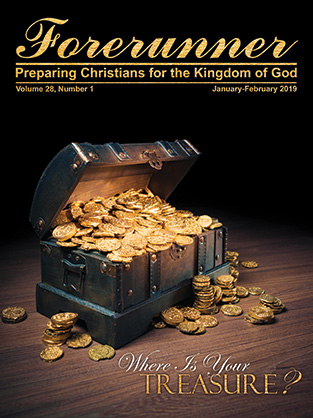 If church members are to grow in grace and knowledge and be zealous in producing fruit to God's glory, they need to have their priorities in the right place. John Ritenbaugh focuses on Christ's words in His Sermon on the Mount about laying up treasures in heaven, explaining that we will avidly pursue what we value. If we desire to attain to the Kingdom of God, we must desire what God desires.

Ready Answer
Unity and Division:
The Blessing and the Curse (Part Three)
by Charles Whitaker

The Bible contains many examples of division and even several that God Himself brought about as a result of His judgments. Charles Whitaker focuses on an Old Testament example of this, when God instructed the Israelites to divide themselves by tribes on Mount Gerizim and Mount Ebal to pronounce blessings and curses. This ancient division provides several lessons that can be applied to the church of God.

Prophecy Watch
The Falling Away
by David C. Grabbe

The apostle Paul penned only a few prophecies in his many letters, and one that receives a great deal of interest is his foretelling of a falling away not long before Christ's return. David Grabbe unpacks the details of this prophecy, showing that the coming apostasy is worldwide in scope and will put tremendous pressure on members of the church to slip from belief in the truth.

The United States and the United Kingdom have for more than two centuries led the world politically, militarily, and economically. Lately, however, especially in the political realm, they are struggling to enact anything useful. Joseph Baity cites the American election of President Donald Trump and the British Brexit vote as causes of political infighting and partisan backbiting, bringing on governmental paralysis.

The subject of propitiation can be deeply complex. However, understanding three related Greek terms will help to frame propitiation properly, as the expression of God's mercy and grace. Martin Collins explains that Christ's propitiatory sacrifice satisfied both the law and God's holiness, allowing Him to extend mercy to believing, repentant sinners.