It is a well-known biblical principle that sin is addictive and ultimately enslaving. However, the apostle Paul uses an even more graphic metaphor taken from Roman penal practices, describing iniquity as a corpse to which a person remains shackled until he dies from its corruption. This repulsive image should spur us to redouble our efforts to repent of "the sin that so easily ensnares us" (Hebrews 12:1). (iStockPhoto) 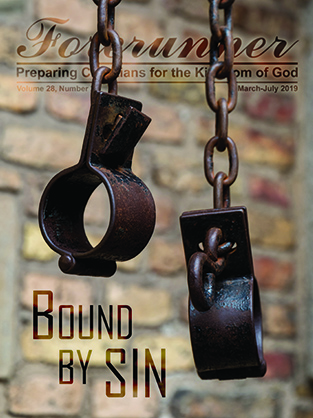 American culture is in obvious decline, and it is undoubtedly linked to the fact that mainstream Christianity is bereft of moral leadership. While it may turn around, the outlook is bleak. John Ritenbaugh exhorts the reader to remember God's purpose for humanity, which His Word reveals and which He is working tirelessly to accomplish.

Ready Answer
Unity and Division:
The Blessing and the Curse (Part Four)
by Charles Whitaker

During the wilderness trek of the children of Israel, God commanded the people to utter blessings from Mount Gerazim and curses from Mount Ebal after they entered the Promised Land. Charles Whitaker comments on the twelve curses, most of which deal with, not obvious sins, but more hidden ones that give rise to hypocrisy among those who claim to follow God.

Prophecy Watch
This Body of Death
by Ted E. Bowling

Under the guise of justice, the Romans were masters of cruelty and torture. We need to look only at their extensive practice of crucifixion to realize how true this is. Ted Bowling describes a lesser-known method of torture in which convicted murderers were shackled to their victims, a picture of a sinful individual's relationship with his iniquities.

In this world, living virtuously is not easy. Those who try to do right often suffer ridicule and face some form of discrimination when they fail to join their more sinful acquaintances in their wickedness. Martin Collins begins a three-part series on excellent character, showing that this world needs to see examples of everyday virtue, if only as a witness against it.