Like citizens of any country, Americans have an image of themselves as a nation: They consider themselves to be patriotic, moral, free, self-reliant, and open-hearted people. But is this true? Has this national identity been invented -- like Uncle Sam -- or was it created by God? (Reuters) 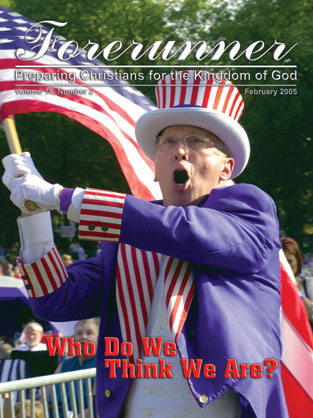 Personal from John W. Ritenbaugh
The Beast and Babylon (Part Ten):
Babylon the Great Is a Nation

Most commentators identify Babylon the Great, the Harlot of Revelation 17 and 18, as either a church specifically or a broader cultural system. John Ritenbaugh, however, produces biblical evidence that the Harlot is overwhelmingly portrayed as a powerful nation that dominates the world at the end time.

Ready Answer
'Perfect In His Generations'
by Richard T. Ritenbaugh

An important key to correct biblical interpretation is to understand a verse or passage as the author intended, not according to our own prejudices. Richard Ritenbaugh explains that Genesis 6:9 has suffered such a biased interpretation and shows what the Hebrew really implies.

Domestic and foreign policy formulations derive from what a nation's people think about themselves. Charles Whitaker delves into the disproportionate divide among Americans between cosmopolitans and nationalists, and answers the bigger question, "Did we invent our self-image, or did God create it?"

In the church, the argument over evolution was settled long ago, but such is not the case in the wider world. David Grabbe goes beyond the science to what embracing evolution actually says about a person's—and a society's—relationship with God.

Where is the house of Israel today? With all the search criteria assembled, Charles Whitaker first shows where Israel is not and then where the various tribes have settled on the modern map of the world. Finally, he expands on the whereabouts of Ephraim, that 'multitude of nations' God promised through Jacob (Genesis 48:19).

WorldWatch
The .45, the GSF, and One-World Government
by Charles Whitaker

News, events, and trends highlighting Bible prophecy for February 2005: "The .45, the GSF, and One-World Government"

Bible Study
Parable of the Good Shepherd (Part One)
by Martin G. Collins

The Parable of the Good Shepherd is one of only a few parables in the gospel of John. Martin Collins explains that the apostle John emphasizes the sovereignty of Christ: He is the great and benevolent Ruler and Owner of His sheep.