Vatican Secretary of State Angelo Cardinal Sodano kisses the ring of Pope Benedict XVI as he leads his inaugural Mass in St. Peter's Square. The new Catholic pontiff, deeply concerned about the state of Christianity in Europe, has already outlined ambitious goals to combat the scourge of relativism and to re-evangelize the Continent. How much can he accomplish? (Reuters) 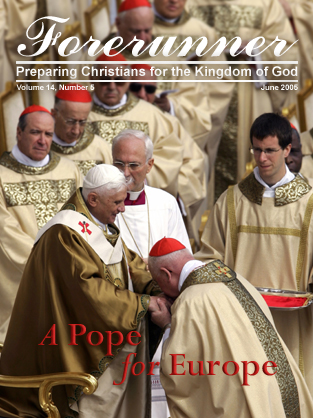 God's children may look no different on the outside than others do, but God has given them something inside, something spiritual, that makes them different from others and special to Him. John Ritenbaugh explains that this specialness obligates us to be faithful.

Ready Answer
What Is Your Lentil Soup?
by Staff

The story of Esau and his selling his birthright for a bowl of soup is a cautionary tale for Christians today. What it is we really value? What we treasure will ultimately determine our destiny.

Is there anything to the constant cries from environmentalists about global warming? Or are they crying wolf? Charles Whitaker tackles this major controversy, relating that there is far more to it than dire predictions.

What's in a Name Anyway?
by David F. Maas

Names not only identify but they also arouse associations—sometimes good, sometimes bad. David Maas explains the biblically, a person's name held his reputation, a thing to be guarded and enhanced through godly living.

WorldWatch
A Pope For Europe
by Richard T. Ritenbaugh

The recently elected Pope Benedict XVI has already set out sweeping goals for his pontificate. Richard Ritenbaugh wonders, however, how much this German pope will be able to accomplish—and whether his efforts will incite turmoil in Europe.

The Parable of the Ten Virgins is without doubt prophetic concerning the attitude of Christians at the end time. Martin Collins discusses the differences between the wise and foolish virgins, drawing out principles we can apply to our Christian walk.