A car, set afire by young Muslim rioters, burns behind police in a Paris suburb on November 3, 2005. France's recent violence—erupting along the fault line between traditional European culture and Islamic culture—could easily spread to other nations of Europe, as similar conditions exist. Will Europe be able to find a solution to this volatile situation? (Reuters) 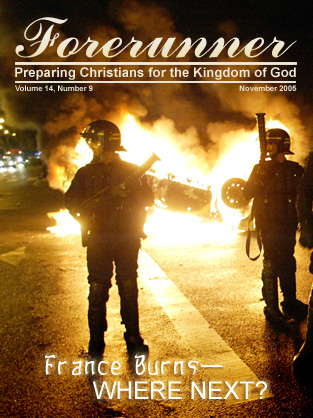 Personal from John W. Ritenbaugh
Be There Next Year

Members of God's church usually return home from the Feast of Tabernacles with renewed spiritual vigor. Even so, we are painfully aware that some members fall away each year. John Ritenbaugh writes that we must actively seek God and His righteousness to ensure that we will be around to enjoy next year's Feast.

Fourteenth-century conqueror Tamerlane learned a valuable lesson from a tiny ant, motivating him to turn defeat into victory. Mike Ford explores Proverbs' admonition to observe the ant, concentrating on the qualities of initiative.

Prophecy Watch
The Zeitgeist of Suicide (Part Four):
A Soup Tureen of Trouble
by Charles Whitaker

With populations around the world in decline, how will governments and businesses maintain the present standard of living? Charles Whitaker reveals that their solution, hinted at in the sudden surge in biotechnology, resides in technology discovering a brave new world.

The recent riots in the Paris suburbs draw attention to a Europe-wide problem: Two very different cultures are battling for supremacy. David Grabbe points out that the powers that be in Europe still do not want to confront this life-and-death issue.

Bible Study
Parables of Matthew 13 (Part Two):
The Parable of the Sower
by Martin G. Collins

The first parable of Matthew 13 lays the groundwork (pun intended) for the remainder of the chapter. Martin Collins explains the various soils upon which the seed of the gospel falls, and the reasons why growth—or its lack—results.