Despite the European Constitution's failure in 2005, the bureaucracy of the EU made another attempt to federalize Europe through the Lisbon Treaty—and failed again. Ireland's referendum on the treaty stopped its ratification in its tracks. It is clear that not all of Europe's states agree on the EU's direction. Where will it head now? (Joesty Nestorius, Wikimedia, Public Domain) 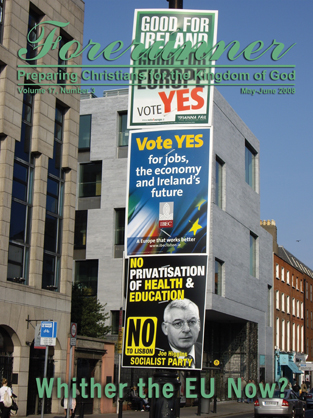 Ready Answer
Should a Christian Play Devil's Advocate?
by Staff

We frequently use words and phrases whose meanings and origins are unknown to us. What is behind the phrase "Devil's Advocate"? Should Christians be engaged in taking the wicked one's side in anything?

The Two Witnesses have once again become a hot topic in the churches of God. Richard Ritenbaugh narrows the field regarding who will fulfill the roles of these two end-time prophets, and uses Revelation 11 and Zechariah 4 to shed light on their early work and fundamental character.

Herod the Great:
A Life of Intrigue, Architecture, and Cruelty
by Staff

While Herod the Great appears only in Matthew's account of Jesus' birth, he played a large role in shaping the world into which Jesus was born. Joseph Bowling recounts the long reign of Herod over Judea, Samaria, and Galilee and his lasting influence on the culture and politics of the region.

WorldWatch
The State of the Union
by David C. Grabbe

It only takes one nation to reject a European Union treaty, even one as significant as the recent Lisbon Treaty. Ireland's referendum stopped this latest attempt to create a European state in its tracks. David Grabbe considers how likely a federal Europe is in light of present political and demographic trends.

Bible Study
The Miracles of Jesus Christ:
Healing a Cripple by a Pool (Part Three)
by Martin G. Collins

When Jesus healed the crippled man by a Jerusalem pool, His Jewish critics were more interested in attacking Jesus for healing on the Sabbath than in rejoicing that a lame man had been made whole. Martin Collins probes this hypocrisy, Jesus' instruction to the healed man, and the man's response to the Jews.