Democratic Presidential candidate Barack Obama has campaigned on a message of hope and change, even titling one of his books, The Audacity of Hope. Despite his liberal views, this message of hope has rallied many Americans to his banner. Is the political hope that he is advocating the same kind of hope found in the Bible? (Reuters) 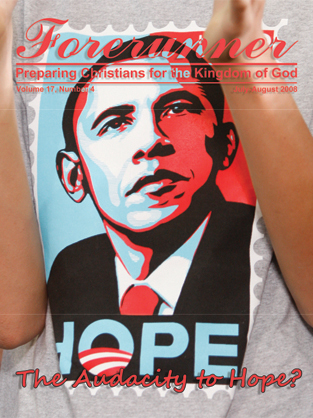 Most people consider the second commandment to deal with making or falling down before a pagan idol, but it has far greater scope. John Ritenbaugh shows that it covers all aspects of the way we worship, including setting ourselves up in God's place by becoming enslaved to our own desires.

Ready Answer
The Audacity to Hope
by Mike Ford

During the 2008 Presidential campaign, Americans have heard a great deal about hope. Yet, "hope" means different things to different people. Mike Ford explains that the political hope held out by politicians does not compare with the hope found in Scripture.

Prophecy Watch
'As a Thief in the Night'
by David C. Grabbe

A survey of the New Testament reveals that, though we may recognize the "signs of the times," we will not be able to determine when Jesus Christ will return. David Grabbe pursues the concept of Christ's second coming "as a thief in the night," and what this means to Christians in this end time.

Herod Antipas:
'That Fox'
by Staff

Herod Antipas, son of Herod the Great, played a significant role in the ministries of John the Baptist and Jesus Christ. Joseph Bowling relates the history of this cunning and self-serving tetrarch of Galilee and Perea.

The world of politics and international relations is convoluted enough to make the mind swim. Geopolitics is perhaps the most conservative method of making some sense of the interaction of nations. Richard Ritenbaugh provides examples of applied geopolitics, as well as a warning of its shortcomings.

One Sabbath during His ministry, Jesus took the opportunity to heal a man with a withered hand. The Pharisees, however, castigated Him for doing so. Martin Collins points out the hypocrisy of these self-righteous Jews regarding the Sabbath.