According to our Savior, the Great Tribulation will be a time like no other in the history of the world. Major elements of that prophesied period are the defeat, enslavement, and scattering of God's people over the face of the earth. As Jesus suggests, the modern fulfillment of the Bible's prophecies will be like and yet unlike--and worse than--its ancient counterparts. (Alamy Images) 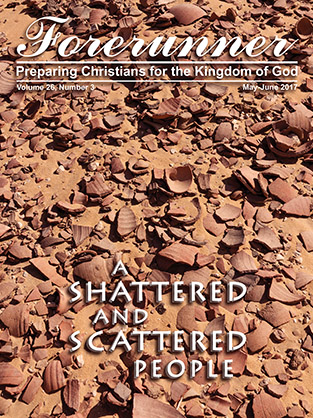 Despite its harshness, God's decision to destroy the earth and humankind by a flood was ultimately an act of great love for His creation. By it, He intervened to derail the degradation of human morality before it became permanently set in man's nature. John Ritenbaugh also explores the first mention of God's grace in Scripture, which occurs within the Flood narrative, showing that the entire episode and the subsequent covenant were effects of His grace.

The offering on the Day of Atonement is unique in that it is a singular offering in two parts, each goat representing a separate aspect of Christ's sacrifice. In Part Three, David Grabbe explains why the goat of departure cannot be connected to the binding of Satan (Revelation 20:1-3), as well as how Hebrews 9 and 10 clarify the Atonement ritual's meaning through the complete—and completed—sacrifice of Christ.

Biblical prophecy shows God scattering His people as a punishment for their sins against Him. During the end time, it appears He will scatter them into small fragments, perhaps even down to individuals alone. Charles Whitaker studies the primarily Hebrew words whose meanings suggest a coming, extensive fragmentation of end-time Israelites. The good news is that God will ultimately regather the humbled remnant one by one.

Within the past eighteen months, at least three major medical associations in the United Kingdom have voted to support liberalized abortion policies—to the extent of "opening up abortion throughout pregnancy for any reason." John Ritenbaugh gathers evidence proving that, despite the public's lack of support for loosening abortion laws, the leadership in the medical profession are weakening standards to the point that human life means nothing.

Bible Study
The Book of Life
by Martin G. Collins

Several times in both testaments, the Bible mentions a book or books that God uses to record the names and perhaps additional information about each person who has lived. This book is called the "Book of Life" or "the book of the living." Martin Collins examines the few scriptures that mention this intriguing book to find out what God's Word reveals about it.