The twenty-fourth day of the ninth month, Kislev 24, on the Hebrew calendar falls at the beginning of winter, typically associated with cold temperatures, bare trees, falling snow, and bracing winds. But in Haggai 2:15-19, God declares that it should be associated with blessings, saying, "From this day forward I will bless you." Why is this date so important to God's people? (iStockPhoto) 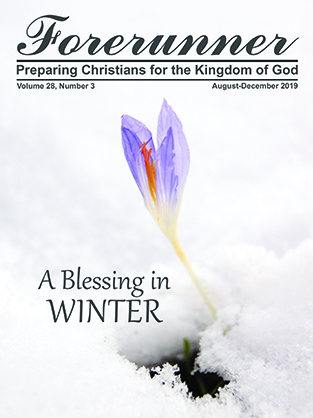 Early Christians, particularly the Jews among them, failed to realize just how indispensable Jesus Christ is to salvation. Their misunderstanding stemmed from their connections to the Old Covenant and its rituals. John Ritenbaugh summarizes why the epistle of Hebrews is so vital to Christians then and now: It explains the unique place and power of Christianity's High Priest.

Ready Answer
Unity and Division:
The Blessing and the Curse (Part Five)
by Charles Whitaker

Most of the twelve curses recited by the tribes of Israel on Mount Ebal contain a common theme: They focus on secret sins, hypocrisies. In closing his series, Charles Whitaker emphasizes that our Savior desires our total commitment to the truth and to Him, and unless they repent, hypocrites will find themselves among those to whom Christ will say, "I never knew you."

God chose the people of Israel to be a holy people, an example of righteousness before the world. However, the Bible testifies that they turned from God early and often. David Grabbe explores the prophecies of Haggai 2 that foretell the good news of Israel's future cleansing and blessing through the work of Jesus Christ.

WorldWatch
Rebels With a Cause
by Joseph B. Baity

It is not unusual for various groups to protest in support of their various causes, but since the end of 2019, we have witnessed frequent, passionate, and violent demonstrations all over the world. Joseph Baity sees these marches—some of which have turned violent—as signs of increasing instability and conflict.

The Bible speaks a great deal about virtue, those excellencies of character that imitate the holy and righteous character of Jesus Christ. Martin Collins explains that Scripture defines virtue as a strength or power that disciplined people use to produce beautiful traits of goodness.