The prophet Amos foretells of a time when God's Word will be so scarce that even the most dogged will be unable to find it. The recent history of the church of God has been a time of "famine of the word". What should the church do in such a situation? Should the feeding of the flock or warning the world come first?  (Applied Optical Media Corporation; Parsons Technology) 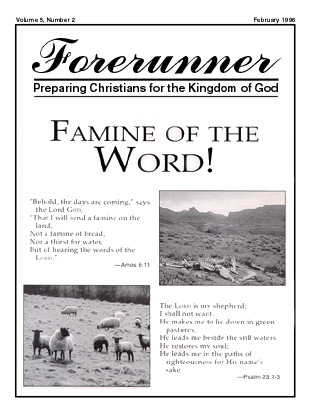 Personal from John W. Ritenbaugh
What Sin Is & What Sin Does

No one seems to talk much about sin anymore, but it still exists! John Ritenbaugh explains the basics of sin and the great effects it produces on our lives.

Protestantism is based on Luther's insistance that Christians are saved by faith alone. But is the really true? Earl Henn explains that the Bible says this of justification, not salvation.

Can a book like the Song of Songs contain prophecy that is applicable to today? Richard Ritenbaugh shows that, far from being just a book about married love, the Song of Songs relates to the present condition of the church.

God's church faces a time of severe trial, a famine of the Word. What should Christians be doing during such a time? John Reid uses the example of the first-century church to provide an answer.