One small sunflower seed produces a plant that will grow taller than a man. But that singular sunflower will produce hundreds of sunflower seeds, each capable of reproducing itself many times over! This principle of increase is active spiritually as well, for the fruits of our actions are prone to increase, whether for good or evil.  (Corel Photo) 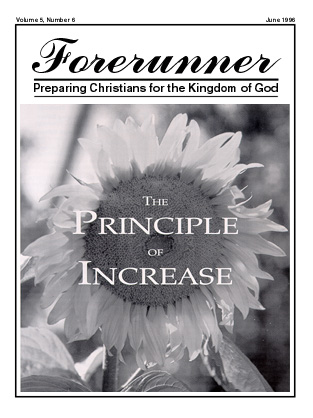 No act is insignificant because of two "natural" principles: the tendency for increase and what is sown is reaped. John Ritenbaugh shows that in regard to sin and righteousness, these principles play major roles in our lives.

Many Protestant denominations teach that God's law is done away. Earl Henn proves that II Corinthians 3:7 does not support this.

Prophecy Watch
The Woman Atop the Beast (Part 2)
by Richard T. Ritenbaugh

In this second and final installment in a series on the great harlot of Revelation 17, Richard Ritenbaugh focuses on her wealth and her bloodthirsty persecution of God's people. A Christians we must watch world events and come out of her ways!

The law says a matter is established out of the mouth of two or three witnesses. Charles Whitaker contends this can also be two different trips or appearances by the same person. The second coming of Christ will be a second witness, and the same kinds of people will either accept or reject Him. Into which of these groups do you fit?

News, events and trends from a biblical perspective for June 1996.

The Feast of Trumpets sounds a dire warning of war on the one hand and triumph for God and His saints on the other. Our goal now is to be prepared for that day when Christ returns!