How many billions of people have lived and died since Adam and Eve? Some estimates run as high as fifty billion! All but one of them, our Savior Jesus Christ, still await the resurrection from the dead. The final festival of the year, the Last Great Day, foreshadows that wonderful time when the graves will be opened, and the dead will live again.  (Forerunner Photo) 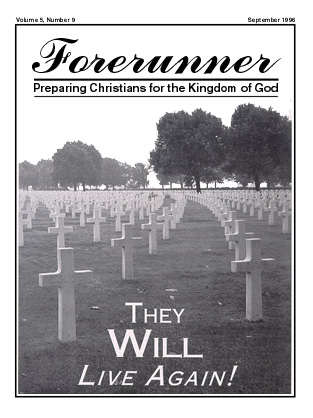 Are the unconverted dead lost? John Ritenbaugh answers that there is hope for them! This part of God's plan is typified in the meaning of the Last Great Day.

Ready Answer
The Third Resurrection:
What Is Its Value?
by Staff

What purpose does the Third Resurrection serve? Is it just so God can punish the incorrigible? Does it play a part in OUR salvation?

Prophecy Watch
Will Europe Ever Unite?
by Richard T. Ritenbaugh

The church has predicted a united Europe for decades, but it seems just as far off as ever. Richard Ritenbaugh explains that humanly, Europe will never unite—it will take "a strong hand from someplace"!

The Mixed Multitude
by Charles Whitaker

When the mixed multitude came out of Egypt with Israel, God gave them an opportunity to join His chosen people. Charles Whitaker weaves together some vital lessons for us from this.

How should a Christian approach vowing? John Reid shows that, although not forbidden, making vows is a risky business.

News, events and trends in light of prophecy for September 1996.

The Last Great Day is the final holy day of the year, and it depicts the final steps in God's plan. After this—eternity!