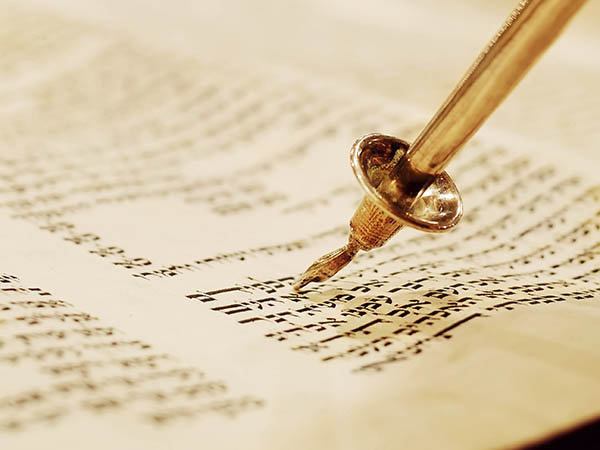 In Part One, we looked at the desperate straits into which God placed the king and the people of Judah on the eve of her fall to the Babylonians.Baruch, Jeremiah’s scribe, certainly an intelligent and perhaps a prominent man in his own right, was born in these dire times. He was not above sounding off about his situation. Jeremiah 45:3 states Baruch’s complaint: “Woe is me now! For the Lord has added grief to my sorrow. I fainted in my sighing, and I find no rest.”

The Scriptures do not quote Baruch’s complaint directly. Rather, it comes to us through God’s recitation. Maybe Baruch verbalized these exact words. It is more likely, through, that he was an inveterate grumbler—a typical Israelite, chronically registering his discontent to Jeremiah using various peevish words. In this passage, God may have simply distilled them into a kernel, as it were, Baruch’s discontent in a nutshell.

A Scroll Too Long

Jeremiah 36 may provide clues about what was behind Baruch’s complaint. God tells Jeremiah in verses 2-4:

“Take a scroll of a book and write on it all the words that I have spoken to you against Israel, against Judah, and against all the nations, from the day I spoke to you, from the days of Josiah even to this day. It may be that the house of Judah will hear all the adversities which I purpose to bring upon them, that everyone may turn from his evil way, that I may forgive their iniquity and their sin.”

Then Jeremiah called Baruch the son of Neriah; and Baruch wrote on a scroll of a book, at the instruction of Jeremiah, all the words of the Lord which He had spoken to him.

The plot thickens. In verse 5, Jeremiah tells Baruch, “I am confined, I cannot go into the house of the Lord.” Jeremiah had upset the apostate leadership so much that they had forbidden him to enter the Temple precincts. Jeremiah, therefore, delegates Baruch as his proxy, as related in verses 6-7:

You go, therefore, and read from the scroll which you have written at my instruction, the words of the Lord, in the hearing of the people in the Lord’s house on the day of fasting. And you shall also read them in the hearing of all Judah who come from their cities. It may be that they will present their supplication before the Lord, and everyone will turn from his evil way. For great is the anger and the fury that the Lord has pronounced against this people.

So it was that Baruch comes to read from the scroll “in the upper court at the entry of the New Gate of the Lord’s house, in the hearing of all the people” (verse 10). Temple officials are quick to get wind of this, and just as quickly, notify the princes. They, in turn, tell King Jehoiakim about the scroll, which by this time has fallen into their possession. The king orders Jehudi to read it. As he does so, the king himself cuts pieces of the scroll off, casting them into a nearby fire “until all the scroll was consumed in the fire . . .” (verse 23).

The destruction of the scroll is emblematic of the king’s arrogant rejection of its message. Verse 24 tells us the Jewish leaders “were not afraid, nor did they tear their garments.” To add insult to injury, the king orders the arrest of Jeremiah and Baruch, a command that is never executed because God has hidden them (verse 26).

What do Jeremiah and Baruch, now in hiding, do? Verses 27-28 provide the answer:

Now after the king had burned the scroll with the words which Baruch had written at the instruction of Jeremiah, the word of the Lord came to Jeremiah, saying: “Take yet another scroll, and write on it all the former words that were in the first scroll which Jehoiakim the king of Judah has burned.”

Verse 32 testifies of this second scroll:

Then Jeremiah took another scroll and gave it to Baruch the scribe, the son of Neriah, who wrote on it at the instruction of Jeremiah all the words of the book which Jehoiakim king of Judah had burned in the fire. And besides, there were added to them many similar words.

This second scroll, then, is even longer than the first. All this transcribing is tedious work, carried out as it is under perhaps less-than-optimum conditions, since Jeremiah and Baruch are in hiding somewhere. It had to be done carefully and accurately. After all, some or all of these words became canonized Scripture, what we now call the book of Jeremiah. These were not man’s words, but God’s.

Baruch has quite a bit of responsibility on his shoulders. The effort may have discouraged Baruch as well as physically fatigued him, resulting in his griping, “The Lord has added misery to my pain.”

Whatever may have been the reason, Baruch asserts, “Woe is me.” God instructs Jeremiah how he is to respond to Baruch’s complaint:

Thus you shall say to him, “Thus says the Lord: ‘Behold, what I have built I will break down, and what I have planted I will pluck up, that is, this whole land. And do you seek great things for yourself? Do not seek them; for behold, I will bring adversity on all flesh. . . . ’” (Jeremiah 45:4-5)

God puts things into perspective for Baruch by making clear His intention and purpose. He has set His hand to bring about a major change in “this whole land.” The rhetoric we find here is similar to what we encounter in Genesis 6:7-8 about the Flood.

So the Lord said, “I will destroy man whom I have created from the face of the earth, both man and beast, creeping thing and birds of the air, for I am sorry that I have made them.” But Noah found grace in the eyes of the Lord.

The parallels between Noah and Jeremiah are remarkable. God protected Noah and his family in the ark while the world as they knew it was being destroyed. Likewise, God had taken action to protect Jeremiah and Baruch, hiding them away as the sun was setting on Judah. The catastrophe to come was immense in scope: All the civilizations of that time were in various stages of unraveling, being uprooted by God Himself.

God cuts through the smoke, that is, through any excuse Baruch may offer for wishing to end his service to Jeremiah and, through him, to God. Jeremiah 45:5: “But as for you, do you seek great things for yourself? Stop seeking!” (Holman Christian Standard Bible [HCSB]).

We may surmise why Baruch sought “great things” for himself. First, he may have considered himself well-positioned to take advantage of unstable times, times of war. Having come from a prominent—or perhaps, once-prominent—family, he may have had the capital with which he could fund significant investments. He may have been well-connected in the society of his day.

He was obviously educated. He understood that knowledge, properly leveraged, becomes power. And knowledge he had, in spades. As the secretary of God’s prophet, he was an insider’s insider. He knew what God was doing. A significant piece of that knowledge was that God had committed himself to protect Jeremiah in troubled times. After all, had he not himself transcribed God’s words, recorded in Jeremiah 1:17-19? God is here commissioning Jeremiah:

“Therefore prepare yourself and arise, and speak to them all that I command you. Do not be dismayed before their faces, lest I dismay you before them. For behold, I have made you this day a fortified city and an iron pillar, and bronze walls against the whole land—against the kings of Judah, against its princes, against its priests, and against the people of the land. They will fight against you, but they shall not prevail against you. For I am with you,” says the Lord, “to deliver you.”

What an insurance policy—underwritten by God Himself! Baruch well may have thought that, if he did not seek to use the unstable situation to his benefit, he did not deserve greatness. Add a little ambition to the mix, and you have a recipe for covetousness.

Stop Seeking Great Things for Yourself

While we do not know the specifics, Baruch apparently sought to take advantage of highly turbulent times, leveraging the knowledge he had in order to turn a profit. God did not mince words: “Stop seeking.” He urges Baruch to read the words he had transcribed for Jeremiah and to heed their warming, not underestimating the enormity of the changes that were in the wings. Jeremiah would shortly see Jerusalem in flames; Baruch would see it in ashes. Great things—fame, notoriety, and money—would do Baruch no good in circumstances totally unlike the days of the fathers, when God had uprooted everything.

Baruch appears focused—maybe even fixated—on himself. He wants to aggrandize himself, bestowing “great things” on himself. In this regard, it is interesting to note the promise that God issues to Baruch: His life. That is all—just his life.

Jeremiah 45:5 reads, “. . . I will give your life to you as a prize in all places, wherever you go.” The HCSB renders it as, “. . . grant you your life like the spoils of war.” The Common English Bible states it as, “I will let you escape with your life.”

Three other times God uses this type of terminology, in all cases as a way of stressing His capability of preserving life in a wartime situation. For example, in Jeremiah 21:9, God promises life to those in Jerusalem who surrender peacefully to the Babylonians: “He who remains in this city shall die by the sword, by famine, and by pestilence; but he who goes out and defects to the Chaldeans who besiege you, he shall live, and his life shall be as a prize to him” (see also Jeremiah 38:2; 39:18).

The implication of God’s promise to Baruch is twofold. First, God connects Baruch’s life with war. War and struggle would characterize his life. Baruch would continue to live as a blessing of God in the midst of a highly unstable environment, not apart from that environment, not in a state of immunity from its hardships. While many others would lose their lives, property, or freedom in the troubles that lay just ahead, God promises that He will preserve Baruch’s life.

Second, the clause “wherever you go” hints that Baruch’s would be a life “on the move.” Perhaps he would even be fleeing for his life at times. His life would not be a settled one behind a white picket fence in suburban Jerusalem. The rest that Baruch wanted, mentioned in Jeremiah 45:3, would not come in this life: It would come later.

It was the worst of times. The winter of despair chilled Baruch. Yet, God promises him his life, if he will refocus his priorities on God’s work, not on seeking fame for himself. It is motivation that Baruch seems to have taken to heart.