Where Has Our Wall Gone? (September-October 2001)


Up to relatively modern times, most cities were surrounded by thick, high walls to defend the inhabitants during war. If the wall was in poor repair, an attacker could easily breach it and invade the city. Likewise, we have defenses to protect our physical and spiritual health?defenses we are obligated to maintain. How strong are they in us? (PhotoDisc) 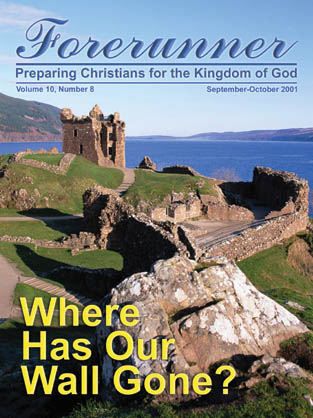 Personal from John W. Ritenbaugh
Eating:
How Good It Is! (Part Seven)

Our physical bodies, like the walled cities of ancient times, have a defense system to keep out invaders. Spiritually, how well do we maintain our defenses against error and contamination? John Ritenbaugh urges us to listen diligently to God's Word for true nourishment.

Ready Answer
Faith to Face the Fire
by Staff

We sometimes mistake faith for certainty about God's will. However, faith is not knowing what God will do in a situation but trusting Him to do what is best for us.

America was not always internationalist in perspective. No, the United States was once quite removed from world affairs. Charles Whitaker shows from the terms of several presidents how the change from isolationism to globalism occurred. Also contains the inset article, "Great Men and God's Sovereignty."

Solomon's glorious Temple must have been a sight to behold. God's church, however, is His Temple now—and each of us living stones in it. Several analogies are drawn between the construction of the First Temple and our preparation for God's Kingdom.

News, trends, and events in light of Bible prophecy.

The doctrine of resurrections is one of paramount importance for the Christian. The third resurrection, however, is one that most of this world's Christianity ignores—but it is the one that shows God's ultimate justice and how He will deal with incorrigibly evil people in godly love.