Prophecy and the Axial Period (February 2004)


Babylon's Ishtar Gate symbolizes the power and wealth of the Chaldean Empire that rose to dominance during the Axial Period. This time saw a sea-change in world affairs -- from new empires to new ways of thinking. Is another Axial Period on the near horizon? (Corel) 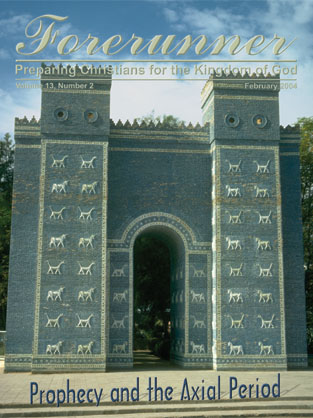 Prophecy has many purposes, but it is never intended to open the future to mere idle curiosity. Its much higher purpose is to furnish guidance to the heirs of salvation. John Ritenbaugh explains how the tumultuous sixth-century BC prepares us for the time of the end.

There is an aspect of God's goodness that is rarely associated with goodness. As surprising as it may seem, God's goodness can be feared! Martin Collins explains why this is so.

Prophecy Watch
Blood and Soil:
The Persistence of Anti-Semitism
by Charles Whitaker

Why has anti-Semitism remained a part of this world's way of thinking? Charles Whitaker shows from recent history that anti-Semitism has merely morphed into new expressions of the old evil.

"While [Jesus] was being tortured, hated, and crucified, was He 'thinking' of all the dirty sins for which He was dying?" asked a correspondent. The Bible shows that Jesus' thoughts were elsewhere—and more constructively—engaged.

In Luke 14:25-33, two parables and an exhortation urge us to forsake all that we have as a mandatory condition to becoming Christ's disciples. One main lesson is emphasized in these scriptures: the nature and influence of true discipleship.