Ariel Sharon (right) attends a 2005 Knesset session in Jerusalem, flanked by Binyamin Netanyahu and Ehud Olmert to his right and Shimon Peres to his left. With Sharon now incapacitated, the other three polititians, led by Olmert as acting Prime Minister, will chart Israel's course over the perhaps turbulent coming months.  (Reuters) 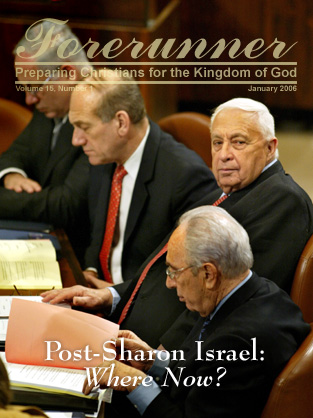 Humanity finds itself inhabiting a world that is the place of restraint for untold numbers of malevolent spirits, all of whom hate God and desire to destroy mankind. John Ritenbaugh reiterates that our human nature reflects these spirits' attitudes, and the only way to overcome it is through God's creating a new heart in us by His Spirit.

Ready Answer
A Sin Unto Death
by Staff

I John 5:16 often elicits many questions about sin and its consequences. This article systematically answers these questions, explaining that the apostle's words hold out hope for those who have fallen by the wayside.

When the Son of God was born into the world, one of the greatest events of all history occurred. Richard Ritenbaugh describes the birth of Jesus and the angel's announcement to the 'shepherds abiding in the fields,' perhaps the first preaching of the gospel to mankind.

Proselytism Yesterday, Today, and Tomorrow (Part One)
by Charles Whitaker

Proselytism has become a bad word in today's discourse, but it has not always been that way. Charles Whitaker explores the Bible's view of evangelism, both from the Old and the New Testaments, as well as the world's official pronouncements on the practice.

With Ariel Sharon incapacitated by a debilitating stroke, what course will the State of Israel take in the months ahead? David Grabbe ponders the possible political consequences of Sharon's absence and considers a wildcard factor in the mix.

Most people, and even theologians, interpret the Parable of the Mustard Seed as an illustration of phenomenal growth of the church. Martin Collins shows, however, that the traditional interpretation is flawed, and that a comparison of biblical symbols points to a much darker explanation.