Israeli Defense Force soldiers proudly fly an Israeli flag as they leave Lebanese territory. After 34 days of fighting, both sides in the conflict had good reasons for agreeing to the ceasefire, but does either side have a good reason to resume the war? And, perhaps more to the point, what part does Iran play in this latest Middle East clash? (Reuters) 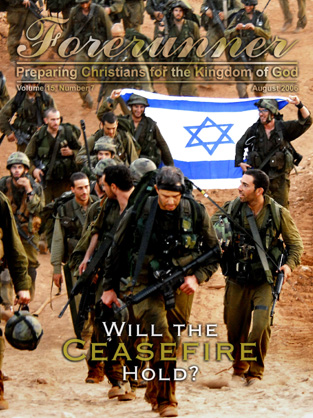 Personal from John W. Ritenbaugh
Is the Christian Required To Do Works? (Part Five)

Jesus Christ came to this earth with a message of salvation, which the Bible calls 'the gospel of the Kingdom of God.' John Ritenbaugh, in setting up the final article in the series, describes just what Christ's gospel is and its relationship to Christian works.

Jesus' Sermon on the Mount contains a concise explanation of what it takes to be a Christian. John Reid puts the spotlight on Matthew 5:38-42, explaining the spiritual principles behind the 'above and beyond' attitude.

Biotechnology, particularly stem-cell research, is the future—or so screams the media, as well as many scientists, actors, and politicians. Charles Whitaker, however, begs to disagree: While we have been inundated by hype, the realities of stem-cell research have been hidden from the public.

A Godly Quest for Pleasure
by David F. Maas

Is a Christian denied a pleasurable life? Are we relegated to lives of drab monotony and duty? David Maas ponders these questions from the standpoint of the drives God created in humankind, concluding that there is a godly way to fulfill our desires for pleasure.

The latest round of fighting between Muslims and the State of Israel has been halted by an uneasy ceasefire agreement. David Grabbe, examining the motives and goals of each side, considers the likelihood of the conflict reigniting—and wonders what agents in the background may be up to.

Bible Study
The Miracles of Jesus Christ (Part One)
by Martin G. Collins

An outstanding feature of Christ's ministry is the many astounding miracles that He performed throughout Judea and Galilee. Martin Collins proposes that Jesus' miracles did far more than merely excite His audience: They declared the Source of His power and His message.