Thousands of Chinese reservists attend a ceremony at a stadium in Nanjing. China is increasingly challenging U.S. dominance in several critical areas, including economic, military, and diplomatic power. But is China in a position to rise to superpower status? Is it on the verge of breaking into the first tier of nations, or will its internal problems hold it back? (Reuters) 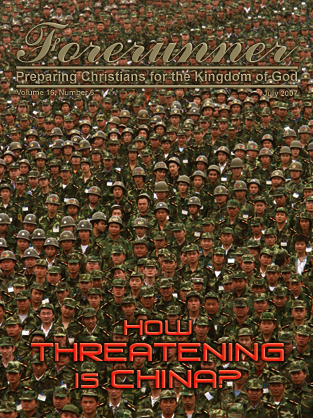 With all the military metaphors in the Bible, there can be no doubt that God likens the Christian life to a fight, a war, against the evils and temptations we face daily. In this light, John Ritenbaugh begins to examine Hebrews 11, the Faith Chapter, showing that the patterns revealed in it provide deep instruction for us in our Christian fight.

Ready Answer
The Sin of Partiality
by Dan Elmore

We all have many biases—toward the food we eat, the cars we drive, the clothes we wear, and even the detergent we use in our washing machines! However, not all biases are good. Dan Elmore provides biblical examples of partiality that caused no end of troubles. More importantly, we need to avoid partiality for the problems it can cause in the church.

The Bible tells us that the time is coming when God will regather His people Israel to the Land of Promise, a greater Exodus than that from the Land of Egypt. David Grabbe gathers the prophecies of this momentous future event, focusing on when it will occur.

In Luke 21:36, our Savior gives us two essential keys to being accounted worthy and escaping the terrors of the close of the age: watching and praying always. Pat Higgins explains the role of faith in the use of these keys, especially in our prayer life.

WorldWatch
Is China's Threat a Mirage?
by Richard T. Ritenbaugh

Recently, a highly placed Chinese official made a point of telling the U.S. Treasury Secretary that China is no threat to the United States. Richard Ritenbaugh shows why this may be true—for now.

The leper who approached Jesus for healing provides us a good example of how we, too, can come before Him for help. Martin Collins examines five vital character traits that we can learn to apply in seeking God's aid.