Turkey on the Rise (November-December 2007)


Turkish Special Forces display their skills at a recent military demonstration. Turkey is geographically situated at the intersection of Europe, the Middle East, and Central Asia, making it potentially influential in all of these regions. Though it is not a regional power yet, it seems to be rapidly emerging as one economically, politically, and militarily. (Reuters) 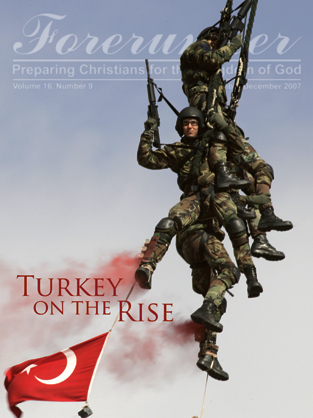 Far more than on any other hero of faith in Hebrews 11, the apostle Paul concentrates on Abraham as the father of the faithful, the Bible's premier example of a human being's walk with God. John Ritenbaugh illustrates how Abraham's faithfulness to God sets a clear pattern for us to follow.

Ready Answer
Ask and It Will Be Given
by Staff

Sometime in their Christian lives, many people hit a plateau in their growth and go little further. Have we have overlooked the simple principle of "ask and it will be given" spoken by Jesus in the Sermon on the Mount?

This year, 2008, is another one in which Passover falls on a weekly Sabbath, making the count to Pentecost more complex. John Ritenbaugh, however, argues that the count need not be done differently in these particular years. All we need to do is to apply God's command consistently.

Praying always and watching—or overcoming—affect every facet of a Christian's life. Pat Higgins relates how deeply examining ourselves for flaws and shortcomings, as we do each year before Passover, helps us to accomplish Christ's Luke 21:36 command.

When Jesus heals the paralytic, He makes no bones about the fact that He, as the Son of Man, has the prerogative to forgive sin. Martin Collins explains how forgiveness and healing intersect in this awesome miracle of God's power and mercy.