The Modern Face of Slavery (September-October 2009)


To most people, slavery is a practice that died with Abraham Lincoln's "Emancipation Proclamation" in the 1860s, but sadly, that is just not true. Although widespread "legal" slavery has long been outlawed in Western nations, the practice of forced human servitude has only morphed into other forms, among which are abusive child labor and prostitution. The buying and selling of people is alive and well, even in the most civilized nations, a modern sign of the continuing influence of Babylon the Great. (Reuters) 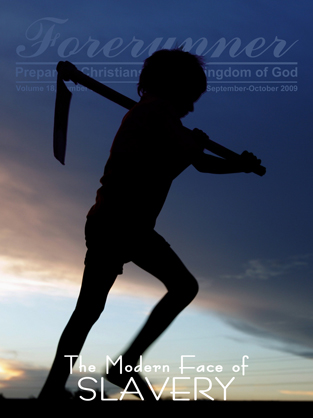 The world is so full of lying and other forms of deceit that "bearing false witness" has become a way of life for the vast majority of humanity. In discussing the ninth commandment, John Ritenbaugh reveals the relationship between telling the truth and faithfulness, virtues that are necessary parts of an effective witness.

Ready Answer
Courage and the Dog Soldier
by Mike Ford

Though we are surrounded and sometimes buffeted by numerous difficulties, trials, and threats, God is always faithful to provide what we need to endure and overcome them. Keying in on I Corinthians 16:13, Mike Ford illustrates what we must do to persevere through the tough times ahead.

Believe it or not, we are all affected by slavery, as human servitude comes in many forms: physical, mental, emotional, spiritual, economic, political, etc. Martin Collins exposes modern slavery in its many guises, comparing it to the Bible's depiction of Babylon the Great and its enslaving system.

More than 65 years have passed since the end of World War II, yet the nations of Europe are still wary of a strong, unified Germany. Richard Ritenbaugh writes that, despite Germany's amicable relationships with its neighbors for two generations, signs of Berlin's growing influence are causing anxiety across Europe and around the world.

The gospels contain many mentions of Jesus freeing the demon-possessed from evil spirits. Martin Collins begins a multipart study on the two demoniacs at Gadara, explaining how demons exercise their powers and the difference between demon influence and demon possession.