We live in a world of rapidly declining morals and civility. God and Christianity, the foundations of Western civilization for many centuries, have been increasingly banned from public life, and as a result, society has quickly accepted blatant sins that just a generation or two ago would have caused deep shame. Who is in control of the goings-on here on earth? How does a Christian live by faith in a culture of such audacious misconduct? (iStockphoto) 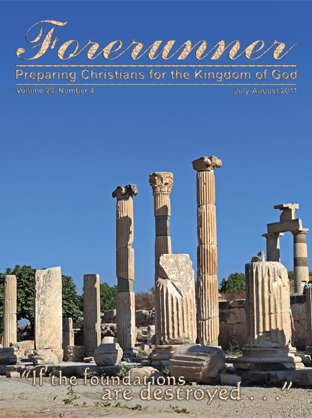 The serious Christian looks on this ever-declining world—a world that reflects the rebellious, anti-God attitudes of Satan the Devil—and wonders how anyone can truly live by faith. Some may even begin to doubt that God is in control of events here on earth. John Ritenbaugh, however, contends that God's sovereignty over His creation is complete, and the course of world events are moving according to His will.

Ready Answer
Devoting Ourselves to Fellowship
by Clyde Finklea

We do not often think of fellowship as a means of devotion, but when we look into the book of Acts at the unity of the early church, fellowship was a priority of those first members of God's church. Clyde Finklea reveals that Christian fellowship is more than just getting together on a regular basis; it is sharing with each other on a higher, spiritual level.

With both the United States and Europe dealing with an impending financial disaster, the world today is full of economic news. Economic terms and philosophies are common knowledge to many. While many doubters think that the Bible is not sophisticated enough to comment on such modern ideas, Richard Ritenbaugh explains that God's Word does indeed factor economics into the end-time equation in its prophecies.

Since its founding in 1948, the State of Israel has been backed up against the Mediterranean Sea, facing a hostile Arab world in every direction. David Grabbe describes its current situation as even more dire, as the "Arab Spring" has turned some of Israel's recent allies and non-belligerant neighbors in the region into enemies.

Bible Study
The Miracles of Jesus Christ:
Exorcising a Syro-Phoenecian (Part One)
by Martin G. Collins

Jesus Christ's exorcism of the daughter of a woman from the region of Tyre and Sidon was more than just another astounding miracle. It also brings out the surprising depth of the woman's faith in Him. Martin Collins expounds on this faithful Gentile's persistence and humility in pursuing Christ's favor on her daughter's behalf.