What Happened at En Dor? (September-December 2013)


I Samuel 28 records the story of King Saul's consultation of a medium, often called the Witch of En Dor, to speak with the prophet Samuel, who had been dead for five years. Some people believe this is biblical proof of life after death, but is it? Is the spirit that the medium sees really Samuel? A careful reading of the text reveals that it agrees with the rest of Scripture. (iStockphoto) 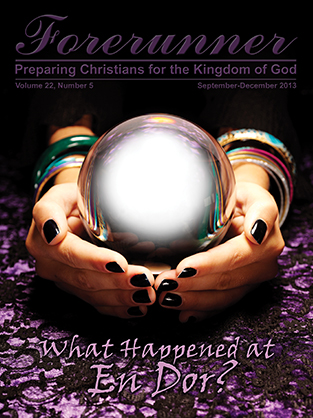 One of the lessons of Ecclesiastes is that God is intimately involved in the lives and futures of those He has called into His purpose. To this end, He has given His people tremendous gifts that, if properly used, will build their faith and draw them closer to God. John Ritenbaugh encourages us that we matter to God: He wants to see us succeed in life and be prepared for life in His Kingdom.

Ready Answer
Do We See the Line?
by Mike Ford

Larry McMurtry's Lonesome Dove, a bestselling book and television miniseries in the 1980s, contains the story of a cowboy who fails to perceive the line between right and wrong, and for his lack of moral sense, he pays with his life. Mike Ford considers I Corinthians 6:12 and the subject of "gray areas," showing that learning the spirit of the law will aid us greatly in "seeing the line."

There can be no doubt that the past five centuries or so have been markedly different from the Medieval and Classical periods of Western history. In fact, so much change has occurred in our modern era that some are positing that, since the Renaissance, a Second Axial Period has been in process. Charles Whitaker highlights many of the profound transformations of thought—and their subsequent repercussions on society.

What Happened at En Dor?
by Richard T. Ritenbaugh

The narrative of King Saul of Israel visiting a medium at En Dor on the night before his final battle is an anomaly in Scripture, relating the story of a "successful" seance. Richard Ritenbaugh dissects the text of I Samuel 28 to expose several common misconceptions about the events of that night.

WorldWatch
Coming:
Dry Times in the U.S. and Israel
by David C. Grabbe

Talk of "global warming" and "climate change" fill the airwaves and the Internet, but real drought has hit parts of America and Israel with devastating effects. David Grabbe analyzes the deepening crisis, focusing on depleting reserves, unreasonable allocation, and possible man-made remedies.

As was His custom, Jesus attended and/or taught at a synagogue on the weekly Sabbath, and on one occasion, He noticed a severely deformed women, bent nearly double, in the audience. In His profound compassion, He healed her of this infirmity, which had plagued her for eighteen years. Martin Collins expands on the details of the gospel narratives on this merciful miracle.