Lowly, and Sitting on a Donkey (January-February 2015)


Jesus Christ's triumphal entry into Jerusalem just days before His death is a highlight of His ministry. He rode into the city that day on a donkey rather than on a horse, as we would tend to expect of a king. Biblically, in contrast to the horse, the donkey has a significant symbolic history that adds a great deal to our understanding of Christ Himself and of Christian character. (iStockphoto) 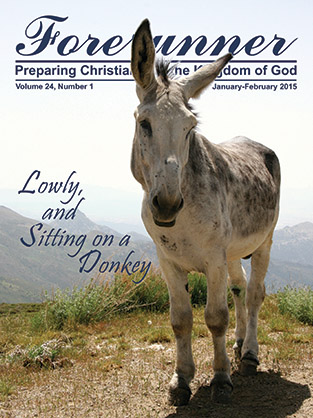 The spiritual paradox that Solomon relates in Ecclesiastes 7:15 is followed by a warning of danger about a Christian's reaction to it. John Ritenbaugh assures us that confounding trials are not punishments from God for unrighteousness but tests of faith in which He is intimately involved to prepare us for the world to come.

Ready Answer
Why Was Jesus Not Crucified as Passover Began? (Part One)
by David C. Grabbe

Many Bible students scratch their heads over a seeming discrepancy in timing between the Old Testament instructions about Passover and Christ's fulfillment of it in His crucifixion. Contending that the spiritual fulfillment is far more important than physical rites, David Grabbe relates that Jesus did indeed fulfill the Passover—just not as one might expect.

Prophecy Watch
Lowly and Riding on a Donkey?
by Ronny H. Graham

Each of the four gospels include a description of the fulfillment of Zechariah's prophecy that Messiah would ride into Jerusalem on a donkey. Ronny Graham explores what we know of the donkey as an animal, revealing that this misunderstood beast has a symbolic meaning that sheds light on both our Savior and Christian character.

Most people think the Cold War is over—in fact, won by the overwhelming power of the United States' economic and strategic might. But could it be on its way back to life? Richard Ritenbaugh argues that Vladimir Putin's leadership has brought Russia back into play as a world power, and nearby nations are once again bracing against its unwelcome aggression.

Christ's healing of ten lepers (Luke 17:11-19) stands as a significant sign of His divinity, as it was widely known that only God could heal leprosy. Martin Collins unpacks this scene, explaining that Jesus' interaction with the one leper who returned in gratitude teaches a great deal about faith and spiritual blessings.