What Is the Second Death? (November-December 2015)


Though the book of Revelation has declared the existence of the second death for more than nineteen centuries, most nominal Christians have little idea what it means. The apostle John states plainly, however, that it is the Lake of Fire where the incorrigibly wicked will be cast and annihilated. In this prophetic concept lies wonderful truth on God’s perfect judgment.  (Alamy) 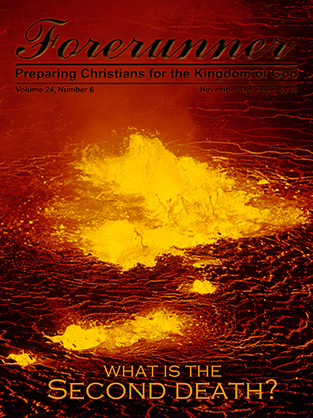 Personal from John W. Ritenbaugh
Leadership and Covenants (Part One)

The quality of human life on this earth has in large part been determined by the character of its leaders. In the Bible we have a record of both good and bad leaders, and it provides a repetitive principle that "as go the leadership, so goes the nation." John Ritenbaugh begins a new series that links leadership to the various scriptural covenants and their success or lack thereof.

One of the "big questions" of philosophy asks whether human beings are by nature good or evil, and despite a long history of philosophers and theologians weighing in on the subject, people seem to be evenly split on the answer. Richard Ritenbaugh, going to the Bible for God's answer, finds that Scripture is consistent in its description of man's nature.

Prophecy Watch
What Is the Second Death?
by David C. Grabbe

The common belief among Christians—and other religions have similar depictions of the afterlife—is that one's immortal soul goes either to heaven or hell after death. David Grabbe argues that this ignores the biblical concept of the second death, an event beyond physical death that not only undermines the traditional heaven-hell and immortal soul doctrines, but also highlights God's perfect sense of justice.

WorldWatch
Anything Goes (Part Two):
Transparency for the Transgender Agenda
by Joseph B. Baity

The transgender movement is becoming frighteningly vocal and hostile to traditional values, and now corporations all across America have added their strength to the matter. Joseph Baity reveals that pro-transgender forces are also targeting the nation's children in an attempt to indoctrinate them to support their perverse practices.

Bible Study
The Miracles of Jesus Christ:
The Withering of a Fig Tree
by Martin G. Collins

Some Bible students scratch their heads over the incident, recorded in Matthew and Mark, in which Jesus curses a fig tree for not having any fruit, even though it was not yet the season for figs! Martin Collins explains this difficult passage, showing that Jesus used the situation to teach His disciples a lesson on hypocrisy.