Christians tend to consider unity as “good” and division as “evil.” God, however, gives us many examples in Scripture of Him judging His people and dividing them into two, often equal, parts. For example, in the Parable of the Ten Virgins, five are wise and five are foolish. In causing these divisions, He signals a reconfiguration of His people, showing who is approved and who is not. (iStockphoto) 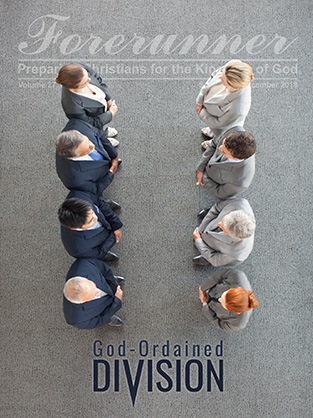 Christians often spend so much time engaged in their present-day trials and tribulations that they fail to understand and learn from the experiences of Christians of the past. In the New Testament, God has supplied His church with multiple examples of the difficult times faced by the early church. John Ritenbaugh provides insight into how those experiences necessitated and shaped the epistle to the Hebrews.

Ready Answer
Unity and Division:
The Blessing and a Curse (Part Two)
by Charles Whitaker

A curious phenomenon ties together several well-known, biblical stories: God makes a judgment and divides His people into two groups, sometimes splitting them right down the middle! Noticing these divinely ordained separations, Charles Whitaker probes the various stories to show that God uses the act of division to reconfigure His people along lines we often do not expect.

Many sermons and articles - even books - have covered the Parable of the Prodigal Son, but most of them dwell on the relationship between the prodigal and his father, giving the elder brother short shrift. Ted Bowling gives the elder brother his due, explaining why Jesus adds his reaction to his younger brother's return.

If Famine Falls Upon Us
by Loren Saxton

The prophet Amos foretells of a time when a famine of hearing the words of the Lord would fall upon Israel. People would search everywhere for it but fail to find the truth. Loren Saxton puts this prophecy into verse, seeing it being fulfilled in our day.

WorldWatch
Denying God From the Pulpit
by Richard T. Ritenbaugh

It would seem only appropriate that a person who fills the office of Christian minister would believe in the Christian God. That assumption, however, is proving to be less correct as society passes more deeply into the post-Christian era. Richard Ritenbaugh explores the admission of a United Church of Canada minister who openly proclaimed her atheism - and retained her pulpit.

Bible Study
What Is Propitiation? (Part One)
by Martin G. Collins

God and humankind are very different. God is spiritual, immortal, righteous, holy, and pure. Human beings, on the other hand, have the opposite attributes: physical, mortal, sinful, profane, and corrupt. Martin Collins begins a short series on the subject of propitiation to explain how God and man can be reconciled and experience a profitable relationship.