Baruch the son of Neriah, the prophet Jeremiah's scribe and companion, may have been a Jew of means and stature in sixth-century BC Jerusalem. The internal clues suggest that he hoped to take advantage of the "inside information" that Jeremiah was prophesying, but when things did not turn out as expected, he complained. God's response to his complaint is a lesson to us living in a similar time.  (iStockphoto) 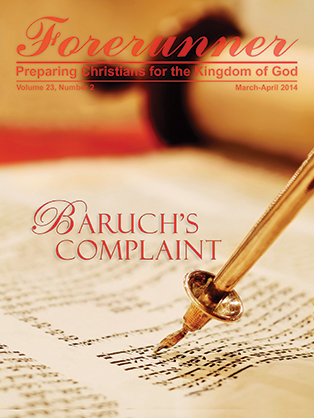 When Solomon visits the Temple, he comes away from his observations of the worshippers with a sense that too many treat religion far too casually and carelessly, forgetting that they are coming before the great God. As John Ritenbaugh explains, Solomon admonishes his readers to listen to God's Word when they approach Him and to be careful to follow through with what they promised when they made the covenant with Him.

Ready Answer
Passover of the Most High God
by David C. Grabbe

Among God's many names and titles is one that proclaims His supremacy over all others: "Most High God" or "God Most High." This name is first used when Melchizedek meets Abram after his victory over the kings who had taken Lot and his family captive. David Grabbe traces the usage of this divine name through the Bible, illustrating how it should give us confidence in God's governance over our lives.

Jeremiah and his scribe and companion, Baruch, lived during a time of great upheaval—in fact, during the decline and destruction of the Kingdom of Judah. In so many words, Baruch complained that God's plans against Judah and its people were crimping his own lofty ambitions. Charles Whitaker elucidates how God replied to Baruch's complaint and provides a lesson for us today.

With one look at American activity on the world scene, an observer is struck by the lack of coherence of this administration's foreign policy. Richard Ritenbaugh offers three examples of major foreign policy blunders over the past five years, asserting that they point to the diminished quality of leadership in high places—and perhaps they are a sign of America's fall from greatness.

Bible Study
Should We Ignore Our Feelings of Guilt?
by Martin G. Collins

Many individuals are wracked with guilt over past words and actions that caused great pain to others. While, in our secular age, such guilty people often do not consider their wrongdoing to be sin, it is "missing the mark" of a certain set of standards. Martin Collins explores the subject of guilt, particularly its relation to sin and its long-term effects.