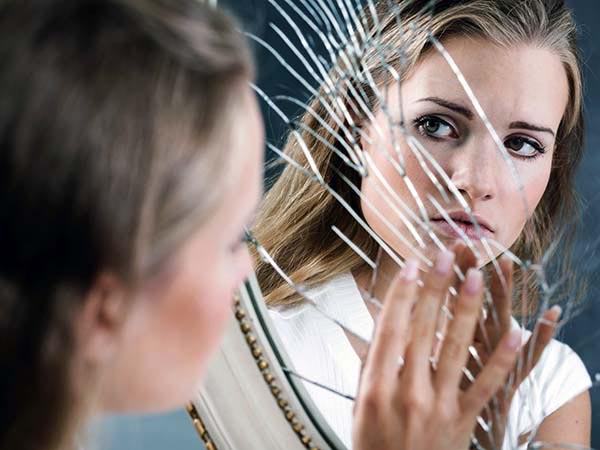 “And why do you look at the speck in your brother’s eye, but do not consider the plank in your own eye?” (Matthew 7:3)

An old Yiddish proverb reads, “Der Spigel iz der greste farfirer,” meaning “The mirror is the greatest deceiver.” We find this statement especially true when we use mirrors that distort the image. How many of us have:

Jesus’ brother, James, advises us that looking into God’s law—“the perfect law of liberty”—and becoming a faithful doer of the Word is the only accurate and reliable mirror to evaluate spiritual progress (James 1:22-25). But many of us prefer to judge our spiritual progress by making comparisons with one another, something the apostle Paul points out in II Corinthians 10:12 as being unwise.

Human nature, very standardized and predictable, seems to have a blind spot to its own faults and shortcomings. Like the car mirrors mentioned above, human nature distorts what we see in ourselves. This mirror is the great deceiver when we apply it to ourselves, but so clear when observing the faults of others.

In Romans 2:19-24, the apostle Paul gives a parallel warning to Jewish religious leaders for hypocritical condemning:

. . . and are confident that you yourself are a guide to the blind, a light to those who are in darkness, an instructor of the foolish, a teacher of babes, having the form of knowledge and truth in the law. You, therefore, who teach another, do you not teach yourself? You who preach that a man should not steal, do you steal? You who say, “Do not commit adultery,” do you commit adultery? You who abhor idols, do you rob temples? You who make your boast in the law, do you dishonor God through breaking the law? For “the name of God is blasphemed among the Gentiles because of you,” as it is written.

In both instances, the topic of judging is ancillary to the egregious evil of tolerating sin in oneself. In other words, the anger both Jesus and Paul express is far more intense against concealing or tolerating sin in oneself than against judging. As we learn in the first chapter of Amos, the sins of Israel’s enemies were hideous and disgusting, but the concealed hypocritical sins within Israel—from the people who allegedly made a unique covenant with God—produced a more noxious stench in God’s nostrils.

Other people’s sins do and should make us angry. But the things that intensely annoy or anger us about other people’s behaviors should serve as warning indicators of the very things that God finds offensive in us.

God has feelings. He cares. He is an emotional Being, and those emotions can motivate Him, just like they motivate human beings. Our emotions ought to motivate us to loathe the same things God loathes.

Years ago, a minister of my acquaintance gave a sermonette in which he suggested that every time we had car problems, we should try to find a constructive spiritual parallel or analogy. Perhaps bald tires could represent a lack of faith or low oil on the dipstick, a lack of Holy Spirit. In that spirit, when we see spiritual faults in others, we should convert them into mirrors, examining our own spiritual progress and looking for similar things in ourselves that grieve God’s Holy Spirit.

While living in Texas, I drove Interstate 20 five days a week between mile-markers 565 and 614, and I noted all kinds of disgusting driving behaviors, including tailgating, cutting others off, excessive slowness, excessive speed, aggression, and timidity. People shook their fists at me in rage for not going fast enough and also for going too fast!

Yet, when I was late for an appointment, I become similarly annoyed and frustrated about people driving at a snail’s pace. When a tailgater followed me too closely, my carnal nature urged me to step on the brakes and give him a good scare. The strange thing about these rude behaviors is that when I do the same despicable things to other people, they do not seem nearly as offensive.

Seeing our behaviors—good or bad—mirrored in someone else is something every parent has experienced. How many parents have ever said, “Just wait until you become a parent. You’ll know exactly the way I feel”? We parents, for good or bad, transfer our values and our ways of doing things to our offspring.

The LORD is longsuffering and abundant in mercy, forgiving iniquity and transgression; but He by no means clears the guilty, visiting the iniquity of the fathers on the children to the third and fourth generation.

Family traits tend to recycle themselves endlessly. When I consider my own quiver of arrows, I recognize both positive and negative mirror images of myself:

My late son, Michael, displayed many positive values, which I trust he learned from me, such as his big-heartedness and generosity and his love for classical music. However, he also reflected things I wish I had not modeled for him, things like occasionally showing a lack of appetite control (a battle I still fight) and intermittent indecisiveness.

My second son, Eric, mirrors certain positive values, which I trust he learned from me, such as his work ethic, making him a faithful provider for his family, and a highly developed sense of ethics. But he also reflects my faults, things like his occasional lapses into obsessive workaholism, when he puts his job before his family and health, and his intermittent, self-imposed social isolation, preferring his own company.

My third son, Aaron, mirrors some positive values I trust I have helped to model for him, such as a wry sense of humor and a desire for scholarship and academic achievement. But he reflects several faults, which I know I have exhibited from time to time, things like exhibiting sarcasm and a critical attitude.

From another perspective, in my father and mother, I see mirror images of myself, with some qualities not maturing until middle age. The older I become, the more commonalities I find I have with my parents.

Our offspring, for better or worse, are reflectors of our behavior.

In 1972, Dr. Dorothy Law Nolte provided a checklist that shows how our children’s behavior reflects the consequences of our behaviors, good or bad. When Michael and Eric were little boys, I had a cloth copy of this poetic list hanging on the wall in their room:

Children Learn What They Live

A more poignant treatment of the same mirror-image theme came out in the 1974 pop song by Harry Chapin, “Cat’s in the Cradle”:

My child arrived just the other day;
He came to the world in the usual way
But there were planes to catch and bills to pay.
He learned to walk while I was away.
He was talkin’ ‘fore I knew it.
And as he grew, he’d say,
“I’m gonna be like you, dad.
You know I’m gonna be like you.”

Chorus:
And the cat’s in the cradle and the silver spoon,
Little boy blue and the man in the moon.
“When you comin’ home, dad?”
“I don’t know when.
But we’ll get together then.
You know we’ll have a good time then.”

Well, he came from college just the other day,
So much like a man, I just had to say,
“Son, I’m proud of you. Can you sit for a while?”
He shook his head, and he said with a smile,
“What I’d really like, dad, is to borrow the car keys.
See you later, can I have them, please.”

Revised Chorus:
And the cat’s in the cradle and the silver spoon,
Little boy blue and the man in the moon.
“When you comin’ home, son?”
“I don’t know when.
We’ll get together then, dad.
You know we’ll have a good time then.”

As a teacher, I frequently become frustrated and angered over certain kinds of student behaviors. One day, I became frustrated at my students for grumbling about my not preparing them adequately for an upcoming test. I told them:

At this point, I realized that God was giving me an insight into my behavior toward Him. Ironically, God sometimes has to show us the hideousness or gravity of our own sins by pointing them out in someone else. As mentioned earlier, Amos, in a similar way, introduced Israel to its sins through those of their repulsive enemies.

One day, our cat Amara was in an ugly attitude, snarling and hissing at her grown-up kittens whenever they would come near her. Noticing this as I was trimming my beard in the backyard, I placed the mirror I was using in front of her when she flew into one of her hissy rages. She became instantly terrified and ran away.

Apparently, King David’s mirror reflected other people’s faults with clarity but distorted the image when applied to him. Notice II Samuel 12:1-7:

Then the LORD sent Nathan to David. And he came to him, and said to him: “There were two men in one city, one rich and the other poor.The rich man had exceedingly many flocks and herds. But the poor man had nothing, except one little ewe lamb which he had bought and nourished; and it grew up together with him and with his children. It ate of his own food and drank from his own cup and lay in his bosom; and it was like a daughter to him. And a traveler came to the rich man, who refused to take from his own flock and from his own herd to prepare one for the wayfaring man who had come to him; but he took the poor man’s lamb and prepared it for the man who had come to him.” So David’s anger was greatly aroused against the man [the mirror reflects accurately other people’s faults], and he said to Nathan, “As the LORD lives, the man who has done this shall surely die! And he shall restore fourfold for the lamb, because he did this thing and because he had no pity.” Then Nathan said to David, “You are the man!”

Nathan had to teach David the seriousness and repulsiveness of his concealed sins by seeing it mirrored in someone else. God often uses negative behaviors in people with whom we come in contact to reflect the hideousness of our sins. Like so many faults I see in others, they are often mirrors of my own shortcomings and failings. The problem when I use others’ proverbial specks as mirrors of my planks is that I fail to reflect upon the warning etched on the bottom: “Objects in mirror are closer than they appear.”

Sign up for The Berean: Daily Verse and Comment, and have Biblical truth delivered to your inbox. This daily newsletter provides a starting point for personal study, and gives valuable insight into the verses that make up the Word of God. Join over 150,000 other subscribers.